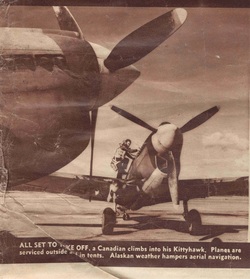 111 Squadron worked in seven different locales. But no matter where they were, their mission was to be ready for the moment captured in this picture. When the call came, pilots scrambled aboard planes they knew were maintained, fueled and armed. Ready to face the enemy.

This photo appeared in The Montreal Standard, October 24, 1942, just around the time that 111 Squadron arrived at Elmendorf. (Photo from the Collection of Flt. Lt. Clifford Hicks, courtesy of his son, Dave Hicks)

The Chronology of 111 Squadron

Early Days
Before the outbreak of WWII, there were few air force activities along the Canadian west coast.  Smuggling, aerial photography and surveying were the main concerns.  Coastal protection, as in olden times, was considered to be the job of artillery.  Airplanes were only seen as aids to finding targets and helping artillery to improve their aim.  In 1932, the first version of No. 111 Squadron was formed.  It was a CAC (Coastal Artillery Cooperation) squadron but the aircraft were not meant to be the sharp end of the spear.  They had a couple of bi-planes. Five years later, Canada began to see that coastal defence required more attention.

The following photographs show the early days of air force training in the Vancouver, British Columbia area.  The upper photograph is of young Air Force recruits, enlistees from the Vancouver area, getting first lessons in military life.  They are keen, energetic-looking and unskilled.

The second photo shows them on parade in Stanley Park, Vancouver on April 21, 1940, only a couple of  months before their squadron will be designated as a fighter squadron.  They have their uniforms, their rifles (it is difficult to tell if they were real or wooden facsimiles), their squadron flight formation with senior officers.

These photographs come from the personal collection of Norman David Eastman, courtesy of his son, Doug Eastman.  There can be little doubt that Airman Eastman was in the lower picture on parade, perhaps, also, in the earlier picture.  Both pictures are bristling with youthful energy and newness.

With the outbreak of war in Europe in September, 1939, No. 111 (CAC) got even more active. But concern for the security of the west coast was not the country's main concern.  Even so, on June 14, 1940, No.  111 (CAC) Squadron was re-designated as 111 (F – fighter) Squadron. It took on coast patrol duties and, while too poorly equipped to take the offensive, it did fly harbour patrols around Vancouver and Victoria, British Columbia.    But the European war had to be prepared for.  On January 31, 1941, No. 111 (F) Squadron was disbanded. Most personnel were distributed among other local squadrons near Patricia Bay, British Columbia.
​
A new No. 111 (F) Squadron was formed in eastern Canada where it would prepare itself to go to the European war.

​When the Japanese attacked Pearl Harbor on December 7, 1941, Canada realized that could no longer be focusing all of its military attention on Europe.  The west coast had become a theatre of war. 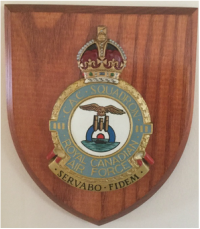 December, 1941, Japanese hostile activity in the Pacific aroused the RCAF to re-task 111(F) Squadron. The squadron had begun training for duty in the European theatre. Suddenly, it was ordered west, to the Pacific coast.   Over the next two months, the Squadron made its way across Canada back to Patricia Bay, British Columbia (Vancouver Island). Their Kittyhawks were dismantled and shipped by rail.  Re-assembly took place  at the RCAF Station, Sea Island, (now Vancouver International) and then the aircraft were flown over to the RCAF Station at Patricia Bay (on Vancouver Island, where the Victoria Airport is today). The relocation of all of the Squadron’s Kittyhawks and personnel was complete by late January.

March 3, 1942, the Squadron’s group portrait was taken at Patricia Bay.  There were 115 men present.

March 17, 1942, the Chief of the Saanich First Nation, in ceremony, presented the Squadron with a Thunderbird Totem and named them the Thunderbird Squadron. This name was loved by the members of the squadron but it was never officially adopted.  In fact, much later, another RCAF squadron (426 Transport Squadron) acquired the name officially.

January to May, 1942, 111 Squadron flew coastal patrols, building experience with the P-40’s capabilities. Nine Japanese submarines had been patrolling along the whole coastline from California to Alaska and the Aleutians.  Tensions were very high both in the United States and in Canada. There was plenty of reason to be patrolling.

May, 1942, anticipating a Japanese attack on the US Naval Base at Dutch Harbor, on Unalaska Island in the Alaskan Aleutians, the United States created a secret airfield on Umnak Island (just west of Unalaska Island)

June 3, 1942, the Japanese raided Dutch Harbor. This raid could have been either a prelude to a major invasion of US territory or just a diversionary tactic. In any case, the Japanese initiative was considered significant.

June, 1942, the Japanese occupied two Aleutian islands, Attu and Kiska, where they installed a very large garrison of troops. 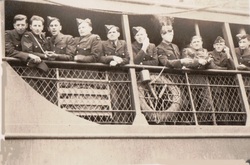 June 1-4, 1942, 111(F) Squadron, as part of a major RCAF deployment to support the U.S., scrambled to move to Elmendorf Air Base, Anchorage, Alaska to be part of a force to defend British Columbia and the Alaska panhandle. Ground Crew and Administrative staff went by ship; air crews flew to Elmendorf via Vancouver, Prince George, Watson Lake, Whitehorse.

This photo shows some of 111's Ground Crew aboard the S.S. Catala in June, 1942:  Phil Davies, Lou Wise, Mike Percheson, Ren Baker, Jerry Summers, Ed Burk, Ed Lans, Paul Lavoie, Fred Child and Paul Mitchell
The photo is from the Collection of  P/O (Pilot) Lou Wise.
​June 11, 1942, 111(F) Squadron reached Elmendorf. It would maintain its main base there until October 30, 1942.

Early July, 1942, 111(F) Squadron was told to detach 12 Kittyhawks, 21 pilots and 60 ground crew for a move to Umnak Island, a forward US airbase. This forward unit would remain on Umnak Island until October 12, 1942.  Their task would be to fly defensive patrols around the islands of Umnak and Unalaska. By taking over defensive duties, they would be relieving USAAF squadrons to carry the fight forward to the Japanese forces on Adak, Kiska and Attu Islands.

This photograph appeared in newspapers across Canada. It shows RCAF #111 Squadron flying over Alaska. It appears here courtesy of British Columbia Air Museum. Thanks Geoff.
July 13, 1942, the first 7 Kittyhawks plus support personnel set out for Umnak.  Only five Kittyhawks got through safely to Cold Harbour, a stop along the way.  Of the remaining two, one was destroyed (electrical failure forced a bail-out), the other crash landed because of impossible weather conditions. It remained, broken, at the airfield until early the following year, 111 riggers retrieved and repaired it. Both pilots survived.

July 16, 1942, two replacement Kittyhawks plus five others set out from Cold Harbour for Umnak. One managed to reach Umnak safely.  One turned back and landed safely.  The others with their pilots were lost. Four, in formation, rammed into the cloud-shrouded mountain on Unalaska Island. The fifth avoided ramming the mountain but became lost at sea.

July 19, 1942, it was decided that since the US forces on Umnak Island were up to strength in aircraft but short of pilots, the 10 remaining 111 (F) Squadron pilots there would fly the USAAF P-40E’s.  These pilots were designated as part of Flight “F” of the 11th USAAF Pursuit Squadron. The retained their identity as RCAF  officers and their borrowed planes were given RCAF and squadron markings.

September 10, 1942, an advance air force base was completed by the US on Adak Island, which was within striking distance of the Japanese garrison on Kiska Island.

September 25, 1942, on a Kiska Island raid, S/L Boomer shot down a Japanese “Zuke”, a Zero equipped with pontoons.

October 31, 1942, 111(F) Squadron was redeployed to Kodiak Island, Alaska to serve as part of the defensive force over the US base there. It would remain there until August 12, 1943.

November 5, 1942, one flight was sent to Marks Field on Chiniak Point, Kodiak Island, Alaska.  Marks Field was a secondary air base on Kodiak. The squadron served there until April 24, 1943.

December 29, 1942, the four 111 Squadron pilots who had taken part in the Kiska raid were awarded the American Air Medal. They were Lynch, Gooding, Gohl and Boomer.

March 3, 1943, 14 (F) Squadron, also flying P40 K1s, replaced 8 (BR) Squadron in X Wing. The 8th's Bolingbroke bombers, of British design but manufactured in Eastern Canada, were subject to an impossibly long supply line and suffered from lack of replacement and maintenance parts. Consequently, they were not as useful as the rugged U.S.-made P-40 fighter for which there was a ready supply of replacement parts because the same aircraft was being used by the USAAF in Alaska and the Aleutians.

May 1, 1943, a group of 10 pilots and 8 P40K1’s from 111(F) Squadron were deployed to Amchitka Island where they were part of the continuing offensive against the Japanese on Kiska Island.

July 12, 1943, the 111(F) Squadron units returned from Amchitka to rejoin the group on Kodiak Island.

July 14, 1943, 111(F) Squadron began turning its Kittyhawks over to another RCAF squadron, 14 (F) Squadron, and stood down so that all involved could take leave.

Mid –August, 1943, the Japanese had quietly slipped away in the fog leaving Kiska abandoned

November 12, 1943, 111 (F) Squadron flew its last mission: two Kittyhawks scrambled from Patricia Bay to intercept an unidentified aircraft. It was friendly. In total, despite terribly harsh flying conditions, the squadron had flown 598 operational sorties in its brief existence. A creditable number since most days in the Aleutians saw weather that no one could fly in.

On February 8, 1944, while the squadron was enroute to its new home at Ayr, Scotland, they learned that their unit was re-designated as   440 Fighter-Bomber Squadron so as not to be confused with the RAF's 111 Squadron. They were equipped with Hawker Typhoons and made a major contribution to the allied victory. But that's another story... 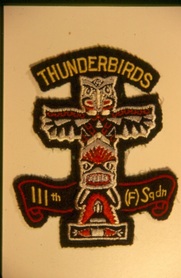 This crest was designed for 111 Squadron after the Chief of the Saanich First Nation honoured 111 Squadron with a Thunderbird Totem (pictured in the crest) and named them the Thunderbird Squadron on March 17, 1942. According to the Squadron Daily Diary, dated February 9, 1942, "A squadron insignia, brainchild of Tom Orthman (Pilot Officer (Pilot) Tom Orthman) is soon to make its appearance" There was no further announcement at the time of its arrival but this is what it looked like . This insignia was painted on the noses of several of 111 Squadron's P-40s. (See article by Lou Wise in Canadian Flight, December, 1999). This photo (courtesy of Lou Wise) is of his crest.
Proudly powered by Weebly